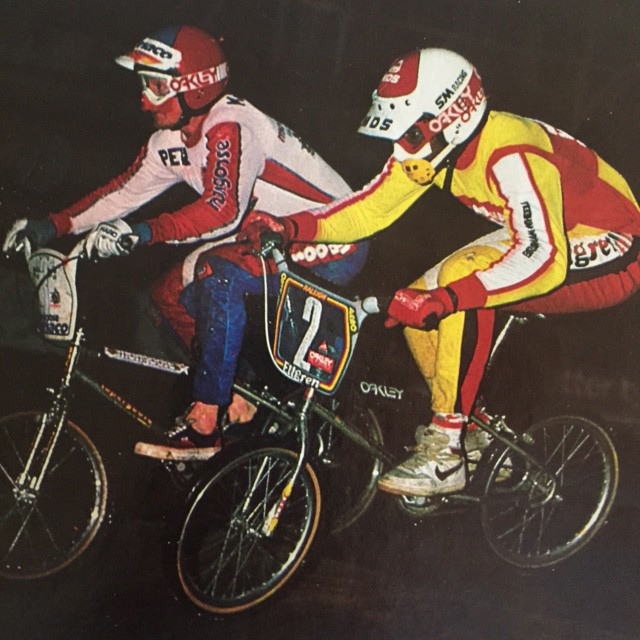 1984 Trevor Robinson wins the first-ever Pro-money Race in the UK – From the very start of racing in the UK in 1979 it wasn’t until March of 1984 before the first, official Pro-money event where the top riders lined-up for a chance to be part of British race history. The event was put on by Fred Hunter of Dronfield Demons and took place at the Derby Greyhound Stadium under the floodlights – classified as an open meeting, as the race was not eligible for National points in either UKBMX or NBMXA. A total of 650 riders turned out on a cold, wet March winter Sunday with the only absent, big names, being Andy Ruffell who was doing demos in Scotland and Tim March was a no show–rumored to have been recovering from a broken ankle or perhaps was still in the States training with Greg Hill and not ready to show his cards yet for the 84 season.

Not being a National event, it opened its doors for not only the top guys who would be racing the newly formed Superclass that coming season in UKBMX but also the top amateur riders in both NBMXA and UKBMX at the time had a chance to sign up and go for the money as well.

UKBMX number 1 in both the UK 15 and 16 age groups respectively, Craig Schofield and Martin Jose were in Derby for local sponsor, Raleigh, as was NBMXA British Champion GT’s, Scott Williams and Patterson’s, Gary O’Connor, who all had plans to stay with their amateur classes for the 84 season but wanted in on some prize money and experience with the big guys. Birmingham Wheel’s Big, Trev Robinson, was fresh back from winter training in the States with other notable top names from UKBMX including Mark White, Pat Robinson, Tony Slater, Pete Middleton and Jamie Vince.

On the NBMXA side you had Hutch’s, Simon Bailey, Cobra’s, Dale Goodwin and the 83 British Champion, Darren Bullock, from just up the road in Doncaster. By the time the gate dropped Sunday night for the final, Big Trevor Robinson powered from the outside lane to take the big win coupled with £100 in his pocket back to Birmingham. Scott Williams came in with an impressive 2nd earning £50 for his trouble with Faze 7’s, Tony Slater in 3rd and £25 for the final podium spot. It was cold, wet and dark by the time the money was handed out but at the same time, another piece of British BMX History had been made.

One thought on “1984 Trevor Robinson”