Good news for those travelling to the British BMX Hall of Fame Event on the 5th November 2022. We have managed to secure discounted rates at the following local hotels:

In response to some of the questions we’ve been asked about the format and running order of the inaugural Hall of Fame event on 5th November 2022:

Doors will open at 18:00 and guests will have time to drink, mingle and chat with other guests before taking their seats for dinner.

Dinner will be served at 19:30, during which the award ceremony will begin.

Awards will be presented in the following categories:

We expect the award ceremony part of the evening to be completed by 22:00/22:30, after which guests will be free to continue the night’s revelries until around 01:00.

To preserve the integrity of the awards, none of the British BMX Hall of Fame Organising Committee or Selection Panel members are eligible to be nominated for any of the above awards. And our plan is to evolve/rotate the Selection Panel every year so that previous years’ winners can become part of future Selection Panels if they wish to be part of that process.

A big THANK YOU again to everyone who has purchased tickets so far.

The fact that so many people are excited about this long overdue event is what drives us to make this a successful and enjoyable evening for all involved.

The hard work behind the scenes continues!

Ticket sales for the British BMX Hall of Fame event on 5th November 2022 are now live on Eventbrite.co.uk.

The first annual event to honour and recognise the people who have made significant contributions to the sport of BMX in the UK.

The sport of BMX racing and freestyle first hit the UK’s shores in the late 1970s. Over the years, the sport has seen many highs and lows, but throughout that time has been kept alive through the hard work and dedication of many people – the riders, event organisers, officials, the BMX media, the BMX industry and an army of volunteers – to the point that BMX in the UK is now experiencing a new golden era, as evidenced by Team GB’s haul of 2 gold, 1 silver and 1 bronze medal at the 2021 Tokyo Olympics.

The purpose of this long overdue event is to remember and honour those people who pioneered the sport of BMX in the UK as well as those who continued to carry the torch for future generations to enjoy this amazing sport. 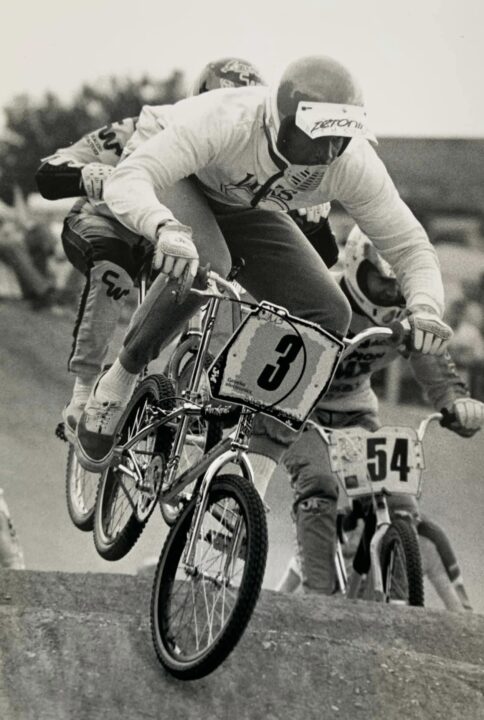 As we once again approach the passing anniversary of our dear friend, Winnie Wright (Feb 13th, 2001), I wanted to post an interview that was run in the May 1988 Issue of UKBMX Race Line Magazine.

NAME: Winnie Wright, my middle name is Anthony. Although a lot of people have got different nicknames for me!

JOB: I’m a Postman. It’s a great job because I can ride in the afternoons, although I have to get up at four in the morning!

HOW LONG HAVE YOU BEEN BMX-ING? It seems like forever, I guess I started riding about Eight years ago.

FIRST RACE: My first race was at Westway. I was doing well until Errol McLean knocked me over a berm and I landed hard on my neck, and everyone laughed at me.

FAVE TRACK: I don’t know. I don’t think there’s a real, first-class track in England, but Alveston and Wigan are rad.

WORST TRACK: Thorne definitely! It is just so crappy!

BIKE HISTORY: You really wanna know, I’ve had a lot of bikes ya know. Well, my first bike was a Team Murray, who’s wasn’t?! Then, I had a Redline, a Torker, a SuperGoose, a blue Kuwahara, a white Kuwahara and even a chrome Kuwahara. Then, I had a March, a JMC, a Mongoose, a specially made Ammaco, and now I’m riding a “Winnie Wright” series frame. I got it made for my design. It is so long!

WORST RIDERS: All of the stiffbacks, the ones with all the power, when they get a jump they go, “AARGH” and fall off!

TRAINING: Yeah, I do a lot of training, down at the pub on Friday nights! My right is so strong! (INSERT LAUGHTER!)

SPONSORSHIP HISTORY: My first team was Westway, we were so fast! Then, there was the Brunswick boy’s club. After that, I got a ride with Sussex BMX. In 1985, I got my first, real Factory ride with JMC. I was riding for Ammaco for two years, but they have no team this year, so I’ve joined Links Racing for ’88.

WHAT CHANGES WOULD YOU LIKE TO SEE IN BMX IN ENGLAND? If I had to say in what happened, I would build a really fast track with massive whoops and stuff! I also think that there should be an open class at Nationals.

BRITISH BMX HALL OF FAME UPDATE: The Organizing Committee is in place. The date is set. The venue is booked. We are now pleased to announce the members of the British BMX Hall of Fame Selection Panel:

ANDY RUFFELL:  needs little introduction.  At age 11, Andy saw the BMX episode of CHiPs and dreamed of one day being able to upgrade his Raleigh Grifter for the real thing.  After working on a market stall and doing paper rounds 7 days a week, Andy was able to purchase his first BMX bike, a Mongoose Supergoose. Before BMX teams were a thing in the UK, Andy spent all of his spare time at Rom and Harrow skate parks and built a reputation as one of the best park riders in the UK, credited as one of the first UK BMX’ers to perfect aerial 360s and giant airs.  In 1980, Andy joined the UK’s first BMX race team, Team Ace, won the first official BMX race in the UK, and was quickly snapped up by Ammaco Mongoose to become Mongoose’s first factory sponsored European rider.  As BMX blew up in the UK, Andy became the UK’s first BMX superstar, traveling the world racing and also putting on freestyle demos to huge crowds.  With the sport at its peak, Andy signed the biggest BMX sponsorship contract in UK BMX history with industry giant, Raleigh Bicycles.  Off the track, Andy developed a significant career in TV, hosting BMX Beat, The Tizer Freestyle Championships and Kellogg’s BMX Championships on mainstream TV.  Andy also founded and produced several BMX events, most notably Holeshot, which attracted the top BMX and skateboard talent from all over the world.

SCOTT DICK:  is well known on the UK BMX race scene as a legendary commentator and someone who has dedicated his life to growing the sport of BMX.  Scott’s BMX journey started some 41 years ago when he was Track Director of the fabled Westway track in West London (his wife Margaret also handled admin and finish line duties).  After Westway, Scott became Chairman at Hillingdon Hawks BMX club, and when his son Alex began racing at 3 years old, Scott, Marg and their 3 kids became regulars on the UK and European race circuit.  As Scott’s presence and reputation grew, he was invited onto the Board of GBBMXF and the BCF BMX Commission.  Scott was also instrumental in devising and promoting BMX race events at the NEC Bike Show, NASS and the No Clips Series.  More recently, Scott set up the London BMX Series seeing it grow from 80+ riders in 2012 to 300+ riders in 2019, and also created a Schools Outreach Project which goes into local schools spreading the word of BMX and teaching kids how to ride bikes.

CLIVE GOSLING:  has veritably feasted on BMX over the last 40 years and continues to remain heavily involved in both BMX racing and freestyle through the Mongoose and GT BMX brands as Marketing Director for Cycling Sports Group. As well as being a National #1 BMX racer (achieved by winning a perfect 10 nationals out of 10), Clive was also an early crossover street rider in the 80s, and in the 90s promoted/presented the GT Air Show with freestyle legends Simon Tabron and Zach Shaw.  Clive represented some of the biggest and best factory teams in BMX such as Revcore, Robinson, Zeronine, ELF, Mongoose and GT to name just a few.  Racer, King of Dirt, street rider, team manager, MC/commentator, Clive has experienced all walks of the BMX life.

DALE HOLMES:  came across a copy of Official BMX Magazine at school in 1981 and shortly after began racing locally at Bunney’s track in Nottingham on his Raleigh Supercross.  1983 was Dale’s first full season of racing and BMX became a family affair with Dale and his sister Rachel travelling all over the UK chasing regional and national points.  As Dale’s profile increased he attracted sponsors such as Bunney’s Bike Shop, Shenpar, JMC, Powerlite and Cyclecraft.  Then, in the summer of 1988 at the age of 16, Dale made the move up to Superclass hoping to supplement his £28.50 weekly YTS wage and fulfill his ambition of BMX becoming his career.  Heading into the 90s Dale began to race frequently in the USA and, after winning the UCI world title in 1996, made the switch Stateside permanent.  Dale spent the next 10 years travelling the world representing GT, Nirve and Free Agent, also picking up another UCI world title in 2001, eventually moving into full time team management for Free Agent and mentoring BMX legend Kyle Bennett and 2 x Olympic Champion, Maris Strombergs.  Dale’s BMX career has now come full circle, racing for fun in Vans on flat pedals, and giving back to the sport by running a number of grassroots school and camp programs for the next generation of BMX’ers.

This image is in fact the first ever official BMX race in the UK, which was organized and put on by Don Smith and ACE’s Richard Barrington back in 1979 at Brockwell Park in London. Ammaco supplied some bikes for the race and in this shot out front you have Trevor Shanks on the left, Alan Sutherland center and winner of the race Pete Middleton on the right. Nicky Matthews is also in the race and you can see Richard Barrington himself in the background watching.

Thanks, Trevor Shanks for the photo and insight on some real British BMX history. 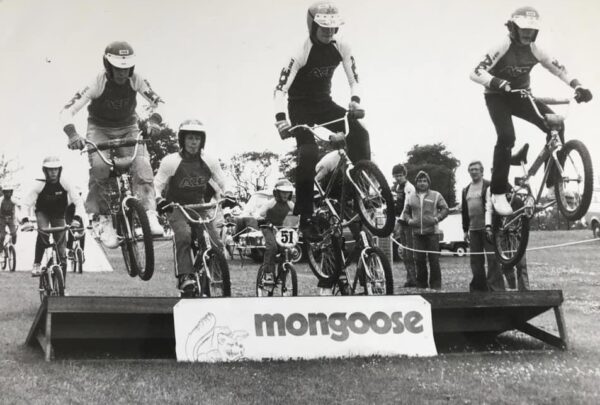