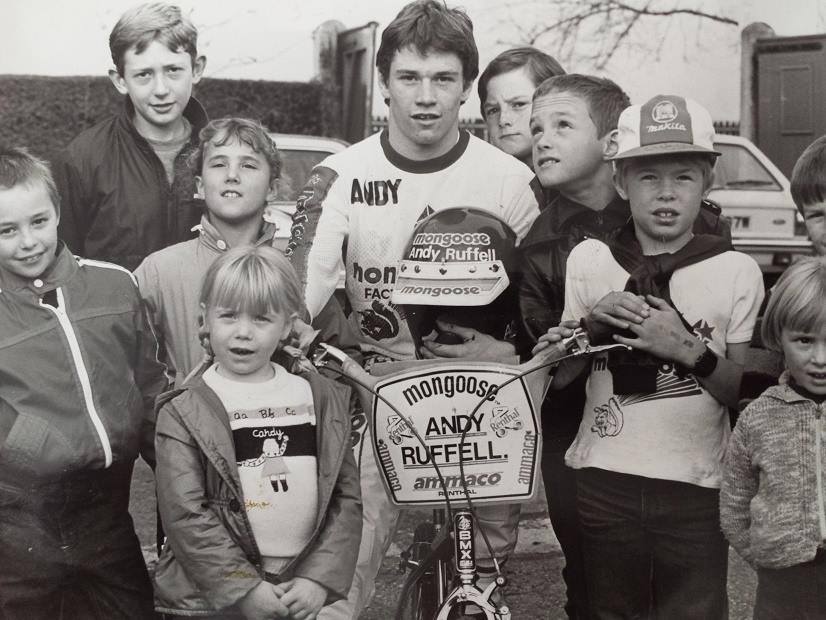 We’ve been trying to nail down Mr. Andy Ruffell for awhile now and we finally sat down in San Diego and knocked out a podcast.

Lots covered, the early years being discovered by Richard Barrington and getting on Team ACE with early UK BMX legend Cav Strutt, winning his first race at Chatham back in 1980 right when BMX was getting off the ground in the UK.

Andy talks getting approached by Malcolm Jarvis and going to Ammaco Mongoose, traveling the country promoting the sport alongside racing and winning national titles in the process.

We also talk about racing with Tim March in 1984 (Superclass), the rivalry and the on-and-off relationship between both Andy and Tim even in current times.

We chat about the big money move to Raleigh in 85, winning the first official Pro Number 1 plate the same year, co-hosting BMX Beat and the Kelloggs with Mick Brown, the rise of Geth Shooter, his brothers Robert and Neil and Neil’s rise to the top on the freestyle side competing and rivaling with Craig Campell (maybe not being treated well from the UKBFA) alongside coming 2nd to Ron Wilkerson at the 85 Kelloggs.

Andy talks about putting on Holeshot, bringing over big names from the US in both Freestyle and Skate including Dennis McCoy, Josh White and Mat Hoffman, to Skaters Jeff Grosso, Christian Hosoi and Mark “Gator” Rogowski, just to mention a few along with all the headaches and problems he encountered putting on an event, from hotel rooms trashed, pros demanding more money and causing havoc on the London underground.

Of course we have to cover his relationship and thoughts on Tony Hoffman, the 1986 Slough World Championships and the UK Pros (PRA) decision not to race, and again more recent drama with Tim March over it all last month.

We discuss and decide it’s about time for an Official British BMX Hall of Fame to be set up and the talks are already in the works to make this a reality along with Andy’s Stunt A Biker YouTube channel Stuntabiker.com and more.