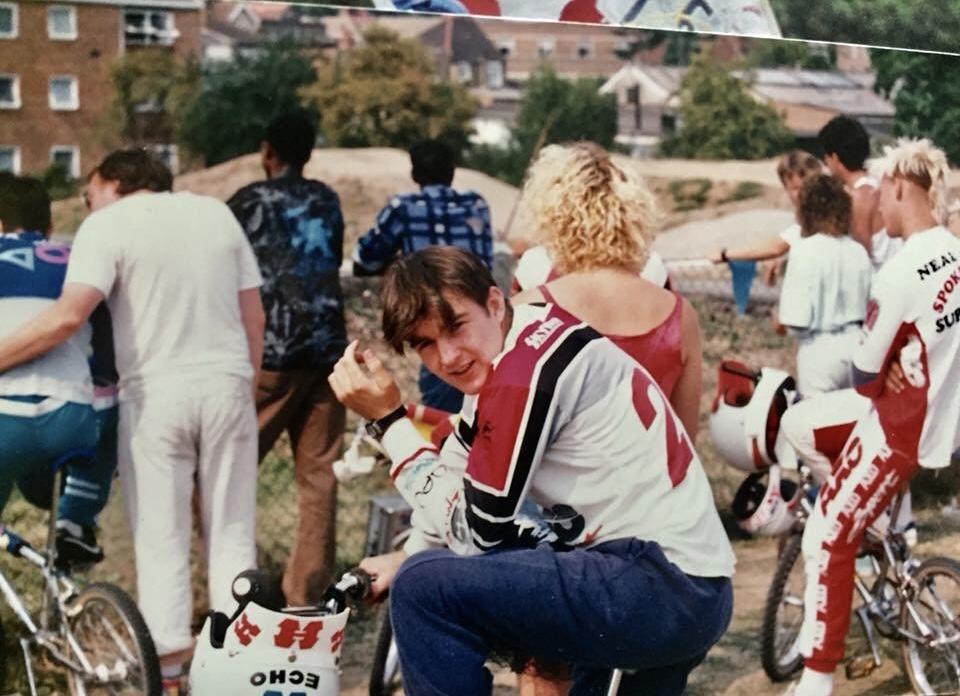 How did you get into racing?

My friend at school brought in a BMX Action Bike magazine and that was it, I was hooked. ET had just come out as well. I found out about Hayes track and rode up there. There happened to be a race going on and I got to see all the tricked out bikes and race gear that I’d seen in the mags and it was like a different world… I had discovered BMX racing, my first race was the 1983 Hayes UKBMX National, I rode 12 novice, made the semis but crashed.

In the London area we had quite a few tracks within riding distance or a short train ride so we were always at a track including Hayes, Hounslow, Westway, Slough, Dormers, Harrow/Meanwhile skate park, building start gates and ridiculous ramps at the infamous White Flats, which is where I met my partner in crime, Keith Joseph. There were a bunch of us that went riding; Winnie Wright, Nicky Restall, Chico Hooke, my little brother Chris, too many to mention, and we’d always meet up with other riders at the tracks.

Your mum, Val, played a big roll in UKBMX behind the scenes telling us a little more about her roll in the federation.

My Mum started by helping out at the finish line and registration, she worked for UKBMX and then EBA doing licenses and pre-registration for the races and general admin work, when the office closed she ran it from home, she ran Hillingdon Hawks for awhile too. There were a lot of parents helping out at the races in all areas, not paid and never really appreciated, in some real ropey weather, without them the races couldn’t be run, so to all those who worked registration, start hill, finish line, referees and in any area of race-day, thank you! 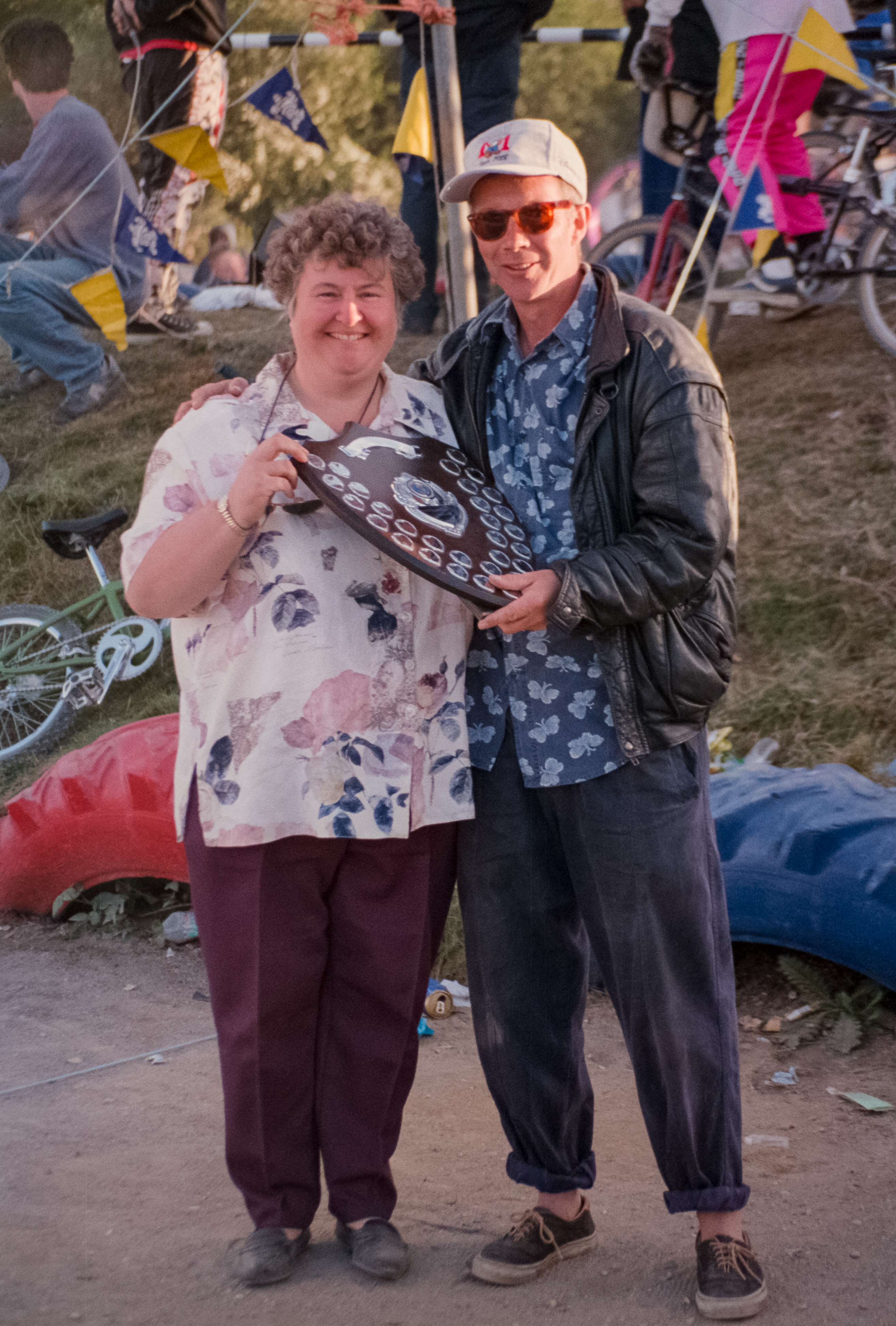 How long did it take before you knew you could win at the highest level and contend for a National title?

It took awhile, raced 13x in 1984, a lot of nationals. I went out in the motos, 1/8, 1/4 finals. I made 2 semis that year, Buckmore and Poole, I amassed 5 points that year and earned the #33 plate. I had a national ranking! The next couple of years were tough, wasn’t ranked nationally, again motos, 1/8, 1/4’s. 1987 in 16x I made my first national final, Wigan, I came 3rd, that year was really good, I made every final, coming 3rd & 4ths, that was the year when the last 3 nationals were worth more points, I think they called them Grand Prix.

The last National that year was at Hounslow, Dean Iddiols had gone Superclass so that left Martin Parker in the points lead. Hounslow was Martin Parker’s home track, I think he lived under the water jump, he was always there! Somehow Martin didn’t make it out of the motos. Paul Roberts came up to me and said, “you know you could get #1 today if you finished 3rd or better” I had worked the points out and already knew that but for someone else to come up and say that to me, I had to pinch myself!! Anyway, the final time came and I placed 3rd. I have to tell you, the few years before hand where I had come 5th so many times and didn’t go through, to achieve that goal of National #1 felt bloody good!

That year taught me consistency, the next year was 17x, again consistently made every final, doing well and then at Bretons I won my first national… that was another amazing feeling… then the Superclass final ran and Winnie Wright won his first Superclass final!! my celebrations were short -lived as anyone who knew Winnie, he was larger than life, I was as pleased for him as I was myself, Winnie was that special. I finished #2 that year, another amazing year.

Rivals during this period?

There were so many; Dean Iddiols, Martin Parker, Clive Gosling, Paul Roberts, Keith Joseph, Robert Indri, Ian Feen, to be honest my rivals were whoever was on the gate.

Why didn’t you ever race NBMXA?

Sponsors during your years?

I made it onto the Free Agent Factory Team, Scott Dick was team manager.

Your brother, Chris Hyde, was a UK 80’s Factory little star in the sport and went onto win the 1990 World Championships. Give us the 411 on Chris’ racing and why he was so good.

Wow, where do you start with Chris, he was amazing, he came everywhere with me, he rode 13 miles to Slough BMX track when he was 7. I used to try and sneak out without him but my Mum was too quick and nabbed me to take him with me, he started out on a mini burner and a motorcycle helmet, he took to BMX like a fish to water, I used to hold his back wheel on the start gate and then boom he was gone and another win in the record books!

His first national on a DP mini firebird at Teeside he came 3rd, 5x was a tough class then, some good riders, all sponsored, like Chris cared, his first year he finished #2 behind Chris Stanforth, we didn’t race 3 nationals that year, the next year it was lights out, Chris won #1, he got picked up by Raleigh and to be honest I think he was #1 for many years to come, maybe 6 or 7 years, this was UK & NBMXA. In 1985 he came 3rd at IBMXF World Championships in Canada, in France at the 1990 Worlds he took home the win, as a big brother I couldn’t have been more proud of Chris. The only title Chris missed out on was European Champion, lots of 2nds & 3rds but the elusive 1st was never to be, like he’s bothered right, World Champ sounds a lot better than Euro Champ! I think Chris riding everywhere with me, Keith, Winnie and whoever tagged along gave him an edge on his rivals, it’s funny after Chris won the Worlds, we didn’t call him Chris anymore, he went by the name “World Champ”, love you Bruv!!

1990 Worlds in France, for some reason I was kicking some butt, my longtime pal and BMX hero, Dale Holmes, lent me his MCS factory shirt. I sailed through the motos, 1/8, & 1/4s, semi time, I was running 2nd through the 2nd turn, those big ass whoops I rode, dropped to third, slipped my pedals out of turn 3, down to 4th, coming out of the last turn I slipped my pedals twice and finished 5th… I was gutted. Ironically the dude who passed me for 4th won. He was giving it large after the win, rightly so, and I said to him, you only won because I slipped my pedals! it was USA Factory Mongoose rider, Sam Allerano. We always raced Slagharen, tough race every year!! Got a couple top 3 finishes in UK Internationals.

What year did you decide to stop racing and why?

I finished off the 1992 season really well, won a couple of the last nationals and came 2nd at the British Championships, ended up #3 that year. Over Xmas I had my appendix out, I had to take 2 months off work and couldn’t do anything physical. My first race back was at High Wycombe, open-winter meet. I was very cautious over jumps and turns and I loved that track! I had started getting back into playing football so I put my efforts into that. Took my FA coaching badges also.

You’ve lived in the US for some time now, how’s life here and do you still follow the sport now?

Yeah, we moved over to the U.S. in 1997, to Massachusetts to start with then headed to Sebastian, Florida in 2002. We have very lucky how things have turned out, made lots of great friends here, a lot of ex-pats as well. I try and keep up with what’s going on in the BMX world, the amount of time I’ve spent watching old UK & US races from back in the day & present is crazy! And, with both Twitter & Instagram, the old pics bring the memories back!

Who are some of the British riders you like to watch these days?

Just follow the World Cup series, so Liam Phillips is pretty much the only one. The tracks now-a-days are follow the leader, no real action in the turns, still the speed they reach and jumps now are pretty scary! Love watching the Grands, the live-feed to the races is awesome.

Living in Florida with many tracks to ride any chance of a come back?

Mate, when I watch the vids, I imagine a snap at every gate drop and go through the motions at every jump. I have a mountain bike I mess about on, no hills or mountains in Florida so I’m limited! I think I could top 3 at a race! We’ll see, stranger things have happened, although I’m still having too much fun playing soccer!!

When I lived in Massachusetts I worked at a residential school for children with behavioral disorders, we had BMX bikes for them to use for activities but the bikes were real cheap. I got with the local bike shop and explained to them my background in BMX and the job I had, they sorted me out at a real big discount to get 4 decent bikes. The kids loved it, I taught them basic maintenance and to respect the bike, we were able to implement the bike program as rewards for them in their behavior and therapy plans.

One day the kids were watching the X-Games in the rec room, one of them called me and said the guy on TV sounds like you, I said yeah right, when I listened closely I couldn’t believe my ears, it was Paul Roberts, would you Adam & Eve it! I told the kids that I knew the guy commenting and the fun & great friends I had made through BMX, a lot of the kids were able to move on from their setbacks in life, there were some real tragic stories these kids had endured. It was a pleasure to introduce BMX to them and give them something to look forward to, I know BMX gave me a lot of fun times and I met and made friends with a lot of people, thanks very much!