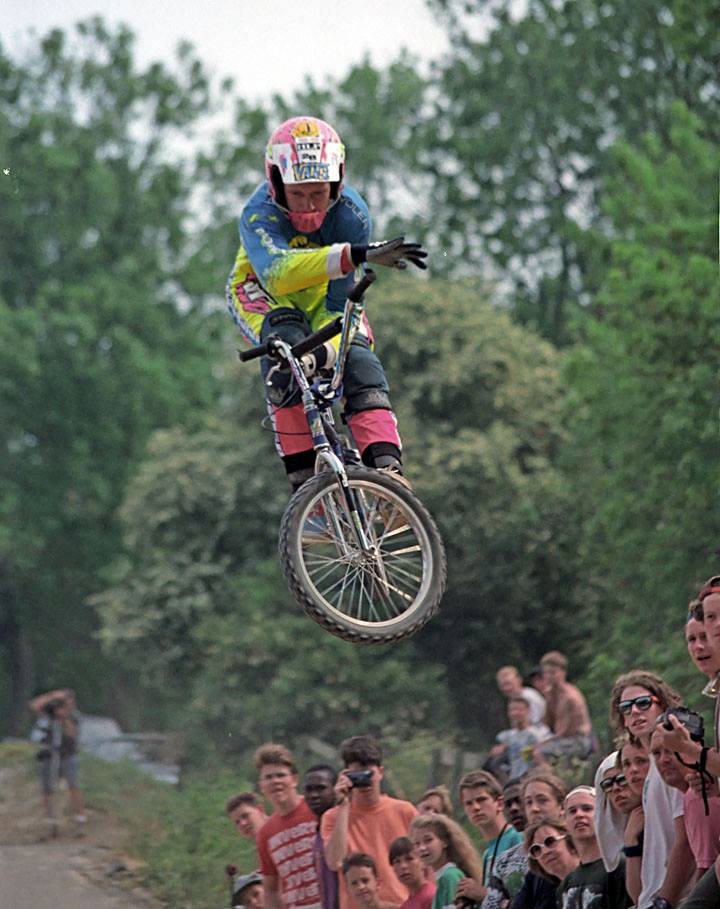 If you were around in the UK race scene during the mid 80s through the 90s or read the UK magazines during that time then, no doubt, you’ll be familiar with Keith Duly. Keith, a Bexhill / Hastings local, was a top National racer during the latter part of the 80s but really made a name for himself during the King of Dirt Series at the National events. It really took off in the early 90s and along with other top racers at the time like Stephen & Martin Murray, Dylan Clayton, Kye Forte, Clive Gosling and so many others these guys could send it in the dirt comps then line up on the gate 10 minutes later and come home with silverware in both. Something that is pretty much unheard of these days.

Keith who rode for Mongoose — was kind of the UK’s version of Fuzzy Hall liked by everyone for his humbleness, radness and passion for the sport — Keith’s family was also heavily involved in the BMX/race scene. Keith’s Dad, Paddy, was a commentator at the Nationals and during the Backyard Jams time, the whole Duly’s home doors were wide-open and essentially turned into a hotel for bmxers from all over the World to crash during the weekend.

Today, Keith is using all of his experience, passion, industry connections and knowledge of BMX to give back to the sport and continue to do his part in grass roots and continually looks at new ways to bring kids into BMX with his, “Jim Dirt’s Jump Club” he’s been rolling. Check it out ( link below ) and enjoy the interview.

First up, how did the name Jim Dirt come about?

It was just a goofy name I used as a kid, when writing to Jive to buy stickers. It was never meant to stick.

How many years have you been involved in the sport?

Probably since 1983 or there-abouts.

Coming from Hastings, which has always had a big BMX community both Race & Freestyle, who were some of the locals that inspired you back in the early days and spots/tracks you rode?

If we weren’t racing then we used to go wherever Stu Dawkins (owner of Seventies Distribution) drove us in the Backyard Van. Ian brought a lot of energy to the scene. Mark Richards produced a series of films which indirectly show-cased our scene. People were always visiting from all over the world, I remember Hoffman riding Crowhurst and Mad Dog riding our local track for example.

It was cool being around Backyard Skates as it grew. I remember popping out of work during a lunch break once and seeing Jimmy Levan walking through WHSmith. Team Sano forgot to give Amos a lift home once, he’s still here in Hastings.

Who were your sponsors & supporters over the years?

Mongoose, GT, Vans, UGP, 2B, Backyard and a few free Jive plates back in the day. I only got the Mongoose and GT deals because Clive Gosling needed a wingman for the KODs. I was on Redline for a week.

These days old friends SOURCEBMX and 4Down help keep me and the Duly juniors supplied.

You were a huge part of the mid 90s KOD events that were held at the races that are still talked about today & were documented in the magazines at the time. What are your memories of these comps and the riders you competed with?

KODs were a blast. I won the UK KOD title three years running, not that anyone was counting, except me and maybe Bill Baggs who made the events happen.

Dylan Clayton, Neal Wood, Tony Fleming, Shawn Andrews, Paul Roberts, my homeboys Clive Gosling and Dave Bishop took part, Murray bros were regulars. Every now and then people like Simon Tabron, Scott Stevens and Ian Morris popped in to mix it up. There were usually a few locals who stepped up.

There was a very strict neon dress code and at some point in the series you had to do a nac-nac or a dual no-footer with the legendary Paul Roberts. I remember riders like Will Smyth, Dean Iddiols and Ian Fry being really influential dirt jumpers both at the race scene and the early KOD events. I guess Charlie Reynolds helped to ease dirt jumping events into race meetings in a way. Years later people finally realised that you didn’t have to wear a fanny-pack to pull a 360.

Alongside side Dirt Jumping you were also a successful racer. What were some of your best results over the years?

I won a couple of British Championships on my 24”. I made a 4th maybe 5th, at the Slough European Championship once on my 20”. Frank Brix still beat me even though his fanny pack got stuck in his back wheel. I haven’t said the words fanny-pack for years until now. I raced in Western Australia for a season, thanks to my old friend Peter Read, which was a highlight. But to be honest it was the Superclass dudes like Dylan, Dale, Geth and Neil etc who were redefining UK racing in my era.

Give us a little insight on who and what the LRP was all about.

LRP brothers include Tom Lynch, Daryl Gibbard, Carl ‘ Sex on Wheels’ Alford, Robbie Stobart, Clive Gosling, Steve Bardens, Stevie Pollard, Darren O’Neil, Manfred, Jon-E, our late buddy Ross Hill and Steve Bell was roped in for his mini-bus driving skills and general badass-ness. I got involved when Carl took me under his wing after I got fleeced for second at the Euro KOD. BMX is way more fun with the LRP.

It’s very rare to find racers that do more than race today. Why do you think this has changed since the 80s and 90s where so many riders like your self rode all aspects of BMX?

The Kellogg’s era got me hooked on racing and then it was the original S&M team who brought a fresh influence to the race scene just at the right time for me. I remember so many cool photos of riders not involved in the race scene like the Dirt Bros, John Povah and Taj which really influenced me.

The current SX guys are so skilled. They could kill stuff if they wanted to. I’m sure some reprobate will come along and shake up the current race scene again. I doubt if he or she will come from an Olympic training squad though.

You’re back in the race scene these days giving back to young riders on the grassroots front. Tell us about your Coaching and Jump Club and it looks like the revival of the Bexhill track and race scene.

I’ve always been around the sport helping out. But I was chatting to Ian Morris a few years back and he was talking about the importance of keeping BMX attainable and relevant for new riders. That was a bit of a trigger. Source guys were keen to support something new. I wanted my own boys Ike and Sonny to enjoy their BMXs with friends. More recently I broke a wrist and a rib last summer racing. I’m booked in for shoulder surgery soon. It just means I can devote more energy to JUMPCLUB whilst recouping. We’re aiming to have as much fun on BMXs as we can, racing, skate parks, road trips, whatever. We lucked out on the kids involved. We have a cool race team of local young underdogs, mostly beginners. We have UBR in Superclass men and Double 0 in Championship women. During the last transfer window we signed Mark Fisher, Blake Bros, Jon-E, Rob Stobart, Bishop and Gozza. Even Sex on Wheels formerly left Factory JMC to come ride with us. Skydiver Frazer ‘Mad-Air’ Wells joined our roster recently, he’s a handful.

At the moment we mainly run race and jump coaching locally at Bexhill Burners track, home of the Backyard Jams. 4Down previously lent us the Etnies park, now that’s gone. Currently we’re super excited about linking with the brand new SourcePark under Hastings seafront. The most incredible skate park I’ve ever seen, completely unique.

JumpClub is also an excuse to work collaboratively with creative friends, In the future we’ll have more stuff to buy. I’m hoping to do a decent youth event in the Summer. Do some cool stuff with Source. Get more kids from all over the UK involved somehow.

What are your views on today’s racing and the way the sport is going with the Olympics and SX tracks?

It’s rad, no doubt. I think racing had to get faster and bigger. SX is on a different level and it’s so good to watch. It would be cool if tracks could be designed to encourage more overtaking though. I was kinda hoping that tracks would stay dirt and start to evolve downhill to gain speed, rather than reply on hard surface and tarmac. But it’s up to the new generation of riders to influence their sport now. I think us older generation have a responsibility to help keep the sport rider run and to keep it on the rider’s terms. It needs to keep evolving.

What about grassroots racing?

Lots of local tracks have improved, regional racing is awesome. Martin Baxter and others are running a slick ship in our region, huge props to them. But there has been a lack of progress with real grassroots over the UK. There are a large number of kids who live near BMX tracks who have street BMXs, but the reality is that very few of these kids will ever actually race. Given more resources, clubs could try new ideas, like some sort of street league. Just simple opportunities for these beginners to race each other on normal street bikes, proper novice racing. Novice racing needs developing. The jump into racing is huge for most beginners.

Get the creative BMX companies back into racing and then think innovatively about how we can get more people racing and using tracks.

Being a Hastings local you witnessed the Backyard Jam years. What was your most memorable year and why?

All the early 90’s jams were memorable and a blur. I took it all for granted, having every BMX legend of the era just 100 yards from my house for an annual event. Having a house full of friends come visit, Joe Rich buying me a beer and Dave Clymer over the chasm were my highlights. Great memories of jumping every chasm, except the one where I bust my nut sack open in the warm-up.

I’d like to especially thank my homeboy Daryl Gibbard from Jolt for his time, and the local Burners posse who help every week and raise funds for the track. Thanks to Nicely for the website. I’m really looking forward to spending more time at the SourcePark, it’s a pleasure to be linked to these BMX good guys. As always thanks to JetBMX, United, Big Daddy Plates, Neil Hanvey, BMX.Photos, UBR, Double 0 and the JUMPCLUB regulars. Crowhurst Dennis, Steve Bardens and Mark Noble for helping me to blag this over the years. Shout to our boys Indri, Winnie, Boyley and Ross.