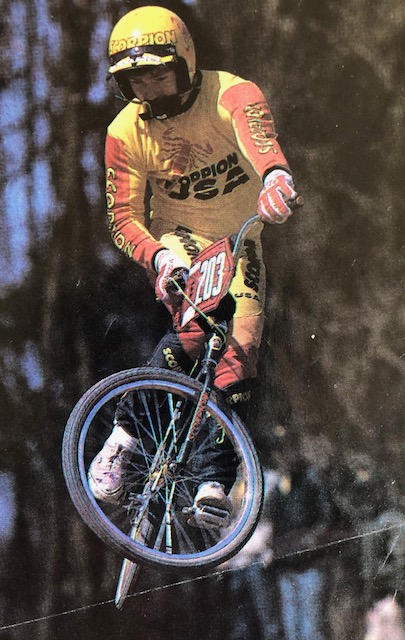 For anyone who hasn’t heard of him, Lee Alexander was one of the big guns of the 1980s, regularly banging elbows with the likes of Stu Diggens, Tom Lynch, Tim Print and of course his local long-term nemesis Darren Wood.

After gaining a nation number 20 in his first full season in 1983, Lee steadily climbed the table throughout the following years, finally winning national number one in 1986.

After that, he moved into the Superclass and then Pro categories where he more than made his presence felt among the established stars there.

As a rider, Lee was super-consistent. While most of his rivals would proudly list the handful of national mains they’d made throughout the season, Lee, when asked, would quietly tell you he’d made them all!

But Lee’s riding career wasn’t limited to the old school. Well into the third millennium, he added a British Championships cruiser win to his list of titles.

Adrian Warden caught up with him at a gate session at Norwich.

This interview came about the same way sponsorship often happens – through being in the right place at the right time. It would have been cool if Norwich club had tempted Maris Strombergs to come to town, but we let it slip. Also Dylan Clayton was booked six months previously to run a talent spotting session at our club. Alas, with just over a week’s notice, it got moved to another venue. The #superfan was on his arse after hearing the bad news.

The day after that, I got a text saying Lee Alexander was coming to ride at the track. I’d not seen him ride since his career-ending crash at Royston a few seasons previously. You’ll do for me, I thought, and grabbed my bike and a pen and paper, with an idea to get a little interview from him.

I raced Lee a bunch of times but never scalped him. Not even in a moto. When you’re in the pens with Lee, especially in a semi or main, he’s always pumped and excited and wants to win it. It feels good to be with him, if you get my drift.

Today he is very involved with coaching at his club Royston Rockets, and is looking ahead to possibly taking over the chairmanship of the East Anglia region next year. He’s gonna shake a few things up, I reckon.

Anyway, I arrive at the track and Lee is decked out in full black and yellow Rockstar kit. In between a few gates and hitting up some of our bigger jumps, I fire off some questions:

So what are your best moments in BMX?

Crumbs, there are so many. [Laughs]. My first trophy at Wimborne indoor – my parents had left me alone at the race. Bercy (France) in 1985 was good. I scraped 4th in the motos, 4th in the quarters and 4th in the semi. I lined up for the main. Dean Iddiols was in the race in front. He turned round and asked, “How’s your gates?”

“I can help you out. Go on the first colour you see.”

I killed it and won. Fans were going mental with massive sticker tosses and hats thrown out that sponsors had given me. I also won the Pontins race, 15 boys. Another good win was an Anglo-Euro race at Ipswich under lights. I took the 1984 Brits win with 1st all day. And of course the 2009 cruiser win at Cheddar Brits. 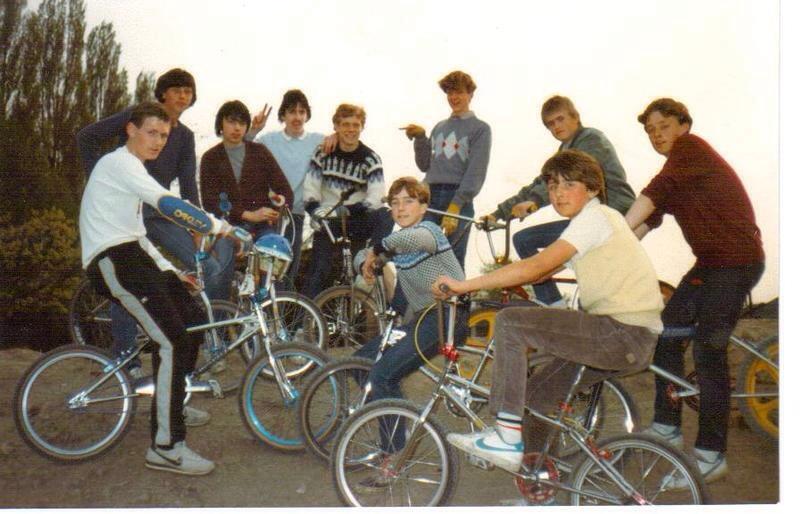 How about your worst days?

1986 Euro Champs. I didn’t get to race because of not being registered. I blame UKBMX for that one. Lol. 1986 worlds. I turned 17 on the day so had to race 17+. Aced the motos. I think there was 16ths? If so, I won mine. Won the eighth. Went over the gate in the quarter. At the 2012 worlds I crashed first lap of practice going into turn one. Busted ribs. Funnily enough though, you never think of injuries as your worst days. I think that’s true of most riders.

So what is your injury count?

Here goes: fractured ankle; broken fingers; broken knuckles – that hurt, I can tell you; punctured kidney; broken elbow; two concussions; a knockout; snapped radius. [You can still see the damage from that when he rolls his sleeve up].

[Grins]. I took Tony Fleming out to win Redcar National.

What about getting taken out?

CJ Butler got me good at the Brits on 20-inch. Last turn. It was raining. I ploughed into a marshal who dropped his coffee in my lap. I thought I’d pissed myself for a while. Darren Wood was the other one. It was the 1986 Worlds, cruiser semi. I was third and he was fourth. Boom. I was gone. I asked him, “Why do it?”

“You’ve done it to me often enough,” he said.

You have no World plates then?

[Lee stares at the floor and shakes his head]. No. That still hurts.

Any pictures in the mags etc?

Nice last turn shot at Cheddar in Fastlane. A 1984 Kuwahara advert. Riding #20 on the plate. Both feet blown off the pedals as I was blasting out of a turn at Hayes. BMX Racer and Freestyle mag for the Bercy win. A decent ad for Scorpion. Also made the cover or back page of the rule book.

Who’s our next Elite in a World final?

Keep them. But if you had asked me when I was racing, the answer would have been get rid.

Yes. Give the fans the maths before the last one. I want to get three mains going for our superclass at regionals as well.

A ‘Me and my Bike’ feature in BMX Action Bike magazine. A profile page in BMX Racer and Freestyle magazine. And there was a short interview on telly (Channel 4) for the Kelloggs race in 1985.

What are your thoughts on the Manchester indoor?

Elite only. I’ve never ridden it and cringe watching kids on it. Not sure what that last straight is all about.

It’s just not BMX is it!

What’s with the women’s funding at British cycling?

Don’t know anything about it mate.

How do you roll?

If there was a coaches’ race, who’d win it? 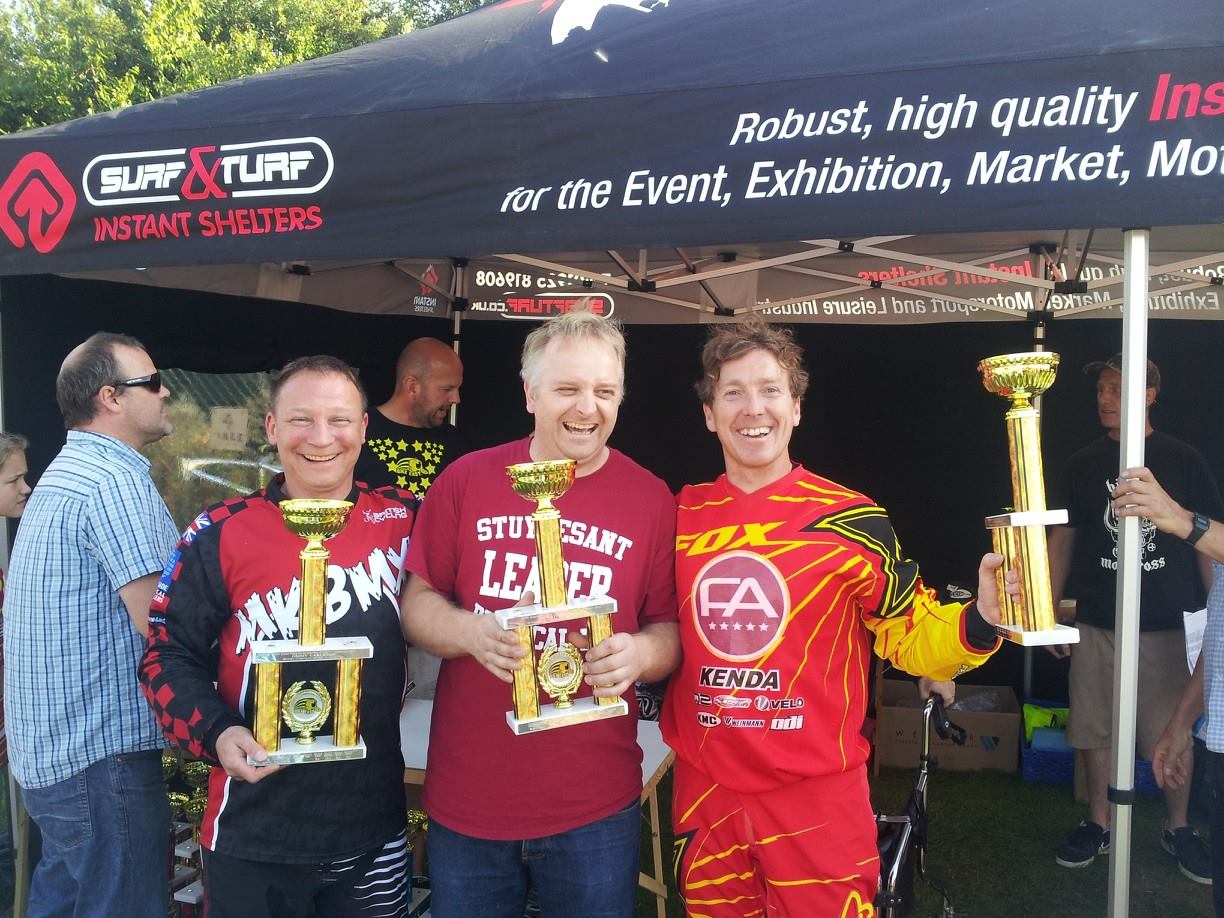 Upward curve, I reckon. I’m all about the grass roots, more racing, flat pedals, skills, promo. We need to get it on telly more. Chris Carter, Simon Hayes… you listening? You work in that field!

There’s some bits missing. I think looking back it made me put too much pressure on myself, thinking it could be the last time I race all the time.

I just love riding my bike, you know. Just ride for fun. It’s what it’s all about. I miss the banter in the pens. The adrenalin. Being in there with 7 other guys that want to win. It’s the feeling. Yes, I miss that feeling.