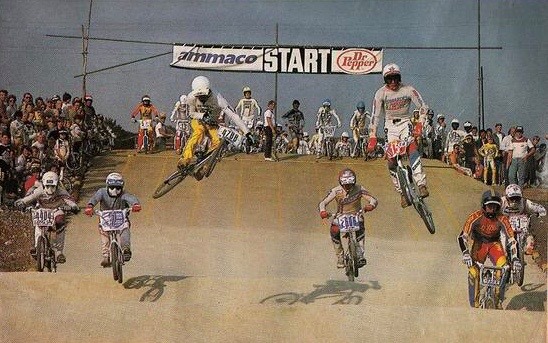 One of the most iconic images from the 80’s in UKBMX is Charlie Reynolds and Geth Shooter over the first Dolly Parton’s during a 16 expert battle at the Poole UKBMX National. We have got a few quotes from the riders who were around at the time and their views on the shot.

Ian Gunner
Geth – “Ere Charlie, why ain’t anyone else jumpin’ these?” Charlie – “Dunno bro, but if I can get over em’ without losing my back end, I’m gonna beat ya”. The rest – “I think we’re in the wrong moto”

Nathan Lunn
That was a real spectacle for Poole National!!! Although, other people jumped the Dolly’s during that weekend, I think this is the picture and memory that comes to mind most. It was a case of those who DARED won. I’m sitting on my mum’s lap in my Torker gear above the head of the rider in Lane 8. Who can name all those that cleared the Dolly’s that weekend?

Gary Fenwick
This is probably one of the most iconic pictures of 80’s BMX. The powerhouse vs the showman. Both riders had a huge impact on the sport, Charlie with his sense of theater and Geth for providing the drama. For me, it was Geth that was the ultimate racer, fast and full of skill on the track but also humble and a great ambassador for the sport off the track. I had the pleasure of Geth riding for me at East Coast BMX when he was between sponsors (that didn’t last very long !!) and we still remain friends today. p.s I’m glad to be on this picture but wish I was a bit further ahead!!! LOL

Jon Beckett
Geth and Charlie at the top of their game, Shooter had the style and the speed, Charlie had a leather fanny pack with mobile phone…if he couldn’t clear doubles in a straight line them he’d 360 them instead.

Julian Allen
This pic captures everything about UKBMX in the 80’s for me. Geth and Charlie had some epic battles but were poles apart as people. One southern, loud and flash and the other Northern, enigmatic and workmanlike. Yet on the track, they both were all business and went all out for the win. Most of the guys in the class were rolling the Dolly’s at Poole but these two bossed it. Geth laying down all the style and Charlie just pinning it. Classic!

Mike Baggs
Timeless classic photo, this was UKBMX racing I think at its best & it was when bmx, in my view, was proper & pure Bicycle Moto X. I’m all for evolving in any sport & it should happen, but looking at this fantastic pic of Geth, Charlie, Martin Jose etc it’s just got this jaw dropping factor about it, it’s hardcore, raw bmx racing at its best, the track was great for it’s time, the atmosphere was electric & the crowd are on edge in anticipation of will they won’t they jump the magnificent Dolly’s every single person is watching this race, in short a stunning picture that will always stand the test of time, people in years to come will still marvel at this pic.

Mike Wong
Not the best BMX photo ever taken, but sums up the original spirit of BMX racing and why so many of us 30 or 40 somethings got into the sport when it first came to the UK. Yes, everyone wanted to win, but everyone also wanted to get rad. That’s the difference between original BMX and Olympic era BMX. Thank God for riders like Billy Luckhurst, Paddy Sharrock, James Horwood, Callum Dalby and Connor Swain who keep the spirit of “getting rad” alive in the UK race scene.

Phil Charnley
“That jump was way ahead of the times and pissed on the likes of Kong or the Chasm just cos of where it was. I swear this pic was on my wall straight outta the magazine.”