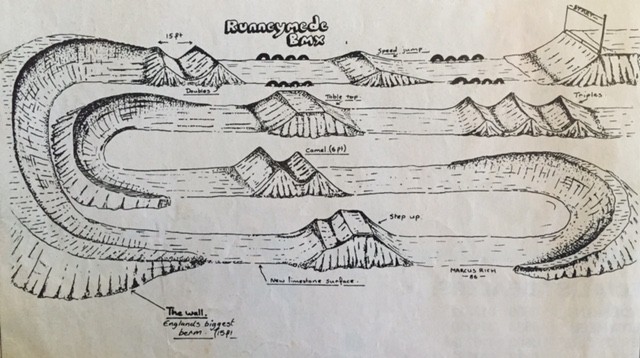 Runnymeade Rockets Track Chertsey Surrey during the mid 80s designed by British Champions, Tim O’Shea & Marcus Rich. At the time, this track was one of the more technical and challenging in the UK with a long, first straight and a peaky-first speed jump up to a 15ft double into the first, big wide-open 180 or “The Wall”, as it was called. The second straight, consisted of a technical step-up with the key to catch backside to set yourself up for another wide-open 180 into a tall camel jump. Last turn, another wide-open 180 turn into a long, last straight with a table-top followed by triples to the finish line.

Even though, now looking back and seeing this diagram, the track was basic but what I did like was the wide-open turns where so many moves were made. If a rider went on the inside to protect his/her line, the rider behind could rail the turns and make passes on the straights with better exit speed. The key to this track was to keep your momentum but with the wide-open turns, so many riders would dive, which kept it interesting. It’s good to see, Runnymeade, finally got an upgrade this year and that the racing is flourishing once again like it was in the 80s. The 1988 NBMXA National Finals itself has a lot of British race history, as the last ever, NBMXA National, before merging with UKBMX to form EBA in 1989. A rider on a Raleigh Grifter, ( Gary Morgan ), also made history racing and winning the 17 plus category and this event also marked the last Pro-Class event before the Pros merged back in with the Superclass and new era of racing for money in the UK for the future.