The Early Years of BMX in the UK – by Jay Hardy

Richard, editor of BMX Action Bike magazine and event organiser looks worried. The hall is at spectator capacity, rider entries have hit the maximum allowed by the insurance and there are still seven hundred people outside. Inside the Pickett’s lock centre the TV crew interview the stars of the show. The main sponsor’s people shuffle about adjusting banners and making sure the TV crew have line of sight to their logo, while more other promotions staff give out Lee Cooper records, stickers and for the chosen few, free jeans. Three short years ago our little sport of bicycle motocross didn’t even have a sanctioning body. But now in 1983 we have two national BMX magazines, corporate race sponsors, factory teams and TV. I look down from the balcony above the track we’ve spent the past three days building and wonder at the explosion of OUR beloved little sport.

Like many kids in the 1970’s I cobbled together bikes made from bits of that bike and bits of this. The obligatory cow horn handlebars were so wide to the nine year old me that they were almost as wide as I could reach. My bikes traditional curved forks were straightened, because that of course made them stronger. I didn’t mind that this caused my foot to rub on the front wheel when cornering, they looked like motorcycle forks and that was cool. My best friend Keith’s older brother Tim raced motocross, his 490 Maico was an object of worship to us, the fastest scrambler in the world by our expert reckoning. The day Tim left his motocross parts catalogue on the dining table remains with me to this. Keith and I thumbed through eagerly choosing the parts we would have on our 490 Maico’s. Then, on the back inside cover was a picture that for me started it all, a DG Rooster BMX bike, it was late 1977.
Over the following years many variations of Grifter based creations came and went, culminating in Keith cutting out the twin down tubes and welding a single tube back in. The finishing touch was fashioning vaguely BMX looking handlebars with my dad’s pipe bender. This was the pinnacle of our efforts and it looked just like a real BMX bike, it was 1979.

In the local woods we built a BMX track, complete with wooden start gate made from a single plank about seven inches high, one foot high berms, whoops and a jump over the ditch. This was our heaven and we spent every free moment riding nearly BMX bikes on our nearly BMX track. In our minds we lived the Californian lifestyle that inspired us and we paid a price for it. In England at that time there was a mod revival, short hair, loafers, preferably burgundy and of course what every football loving sixteen year old saw as a rite of passage, the moped or scooter. We on the other hand had long hair, wore vans, rector skate shorts and rode around on those stupid kids’ bikes. In early 1980 the UK was not a BMXer friendly place.

The day Simon Lloyd asked Keith and I if we’d seen those BMX bikes in the garage on Park Street changed my life, simple fact. I couldn’t tell you how I felt or what happened immediately after he uttered those words, only that minutes later we had cycled the three miles to Park Street and were now looking through a plate glass window in silence. Less than two feet away on the other side was a row of real, yes real BMX bikes. I could have cried with joy and can only think that kids that overwhelmed just can’t. Eventually we went inside, the guy in the garage was called Mike, a trendy 25 year old who told us he was starting a team and already had some riders. Eager to impress our pedigree on him we let him into the secret of our BMX track. A week later Mike Relph arrived with his team to ride our track in the woods. The short version of that day is that Keith and I thrashed them and so were now on the team.

My Dad liked the fact that I spent so much time outside being ‘healthy’ as he saw it. What he didn’t like was the price of these BMX bikes. However with help from Mike he relented and bought me my first BMX bike at a discount, I wondered does this mean I’m almost sponsored. Much to my mothers dismay I insisted that my new obsession stay in my bedroom that first night. I spent most of that evening just sat on my bed looking at it.

A month later we were in Mike’s car on the way to Buckmore Park, the journey took hours as the main roads were building sites. But when they got to finish that M25 all would be free flowing and never again these traffic jams. I can still remember turning into the white concrete road that lead down to the track for that first of many visits. As the tree’s opened up to the right there it was, a real properly constructed BMX track. It was all Christmases ever known come at once, berms ten times the size of our track, tabletops just like in the US magazines I’d started to read and the whole event run by adults just for us, this was big time. In the final that day I was in third coming into the last corner, the only thing on my mind was that third place meant my name would be in Trials and Motocross news, the only publication reporting on BMX back then. As that thought went through my head two guys passed me and I finished fifth.

In the months that followed we rode each freshly constructed track as we heard about it. The small but growing core of BMXers turned up to each race and with each weekend familiar faces became friends and rivals. Time spent chatting revealed the lives behind the rider and with it a theme surfaced, that my story was the usual one. They too had been aware of BMX and longed for something to happen in the UK, they had lived as the kids that didn’t quite fit the British norm of Football, Netball, Cricket and Rugby obsessed stereotypes. We were different, we had different horizons and at last we had something that fitted us. BMX allowed us to express who we were and stood on the vanguard of the changing Britain that the 1980’s was to be.

Throughout 1981 something shifted, kids who previously showed no interest in our obsession had started to show interest. UKBMX was formed, tracks and clubs sprang up all over the UK, Mike opened ‘California BMX’ my first ‘sponsor.’ In the store a video promoting the new sport of Bicycle Moto Cross played constantly on loop. The very pronounced English voice over declared that the rider on view was the American bicycle association champion…..Stuart Thomsen. Seeing this grown man with long hair, wearing Vans, riding a BMX bike on a perfectly groomed track under the blue Californian sky was a million miles away from mods, mopeds, football hooliganism and old cynical worn out England. This was the BMX I had longed for and I wanted all of it. Stuart Thomsen was my hero and represented everything that inspired me to keep treading that path in a new direction.

In 1982 Stu came over for the Mongoose international at Earls Court. I lined up with other kids for his autograph, when I got to the front I handed over a copy of BMX Action with Stompin Stu looming large on the cover. He looked up at me, ‘hey a US mag….cool.’ I looked back at him but nothing came out, I was unable to speak. He signed the cover, handed it back and off I hurried with a head full of ‘cool’ things I should have said. Several years later sitting in my hotel room with Stu and several other US pro’s. I recounted this story. He looked at me and just said ’that happens.’

By 1983 things had gone mad, BMX was everywhere, TV adverts linked to it in some tenuous manner just to be trendy, kids TV presenters talked about being rad in a cadence that gave them away as having not a clue about being rad. Hollywood films like ET had BMX in them, corporations now offered you ET BMX bicycles, breakfast cereals allowed you to win BMX bikes, school bike sheds were full of BMX bikes, BMX, BMX, BMX. What the hell…….. five minutes ago kids of my own age were asking me what the funny little bike I rode was. They hadn’t heard of BMX and now every kid was obsessed with it. These people didn’t love it like I loved it, they were all followers, they didn’t dig in the trenches when local authorities wouldn’t give a minute to a proposal for a BMX track. The same local authorities that now couldn’t wait for the positive press opportunity of the local BMX track opening, complete with smiling Mayor who thought the track looked ‘rad.’

Looking down from the balcony at the throngs of BMX obsessed kids below me I had to smile to myself. BMX was already labelled a craze by the press, to most of the kids with shiny new bikes and race kit in the arena below it was a new and exciting sport. But for those of us who were there years before it was and always will be a partial definition of who we are. But my protectiveness of our little sport fell away when I realised that BMX had outgrown us, it didn’t need protecting and fighting for any longer. It had grown up and repaid us by turning us from the weird kids to the cool kids. It took me years to realise that for many of the kids that came to BMX later, the impact on their lives was in many cases more profound than for us. BMX an Olympic sport yeah right! 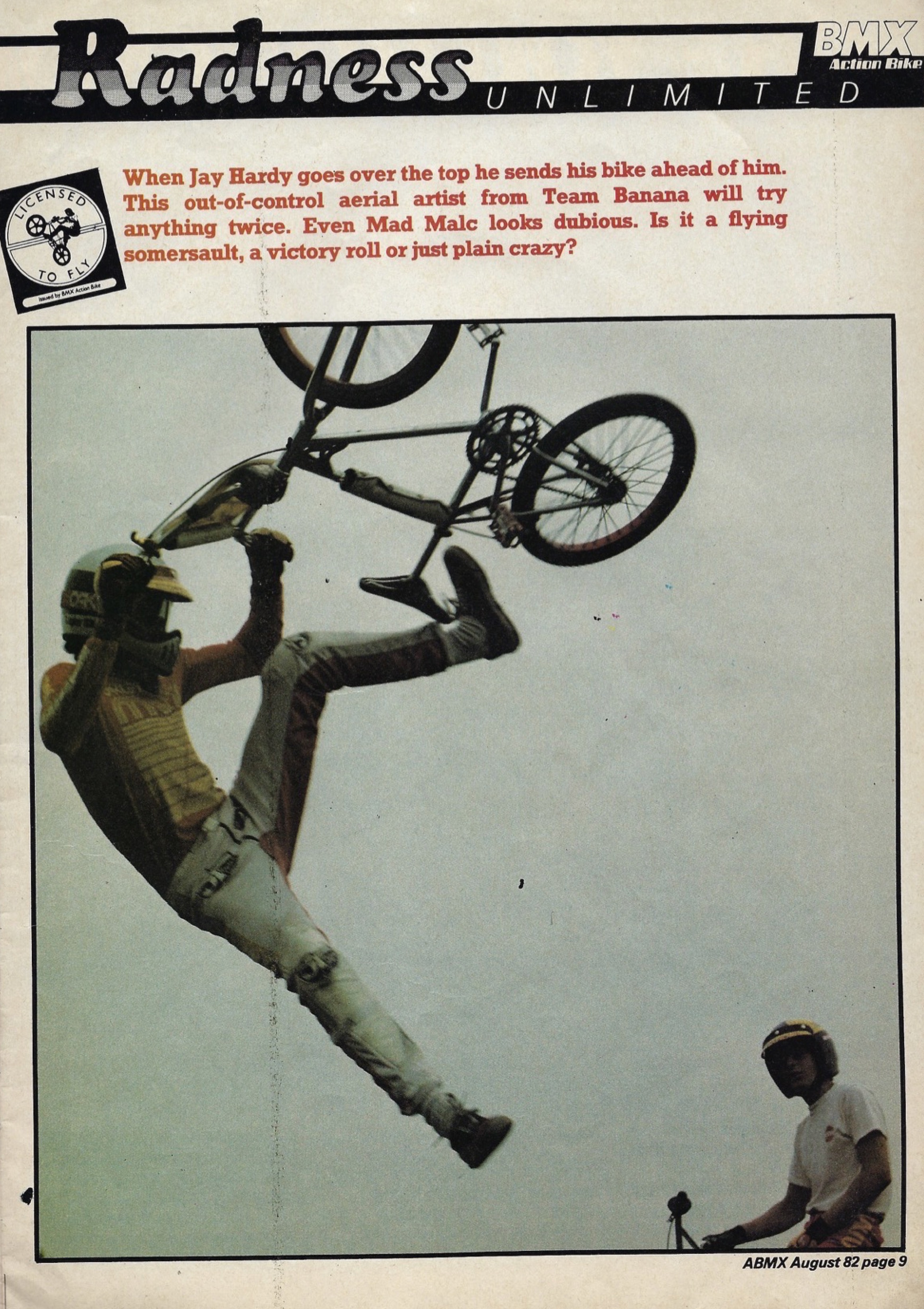 2 thoughts on “The Early Years”