It seems like for one reason or another, Team ACE has been overlooked when we talk about the history of BMX in the UK.  They were right there at the start.  In fact, right here on britishbmxhalloffame.com we thought the first official BMX in the UK was Redditch in 1980, however when researching further, it’s Team ACE we found has the first race put on by Don Smith and ACE’s Richard Barrington a year earlier in 1979 Brockwell Park in London.

We start out with an interview from Team ACE rider, Trevor Shanks who was on the team with the likes of Nikki Mathews, Pete Middleton, Cav Stutt and Andy Ruffell but his name isn’t really mentioned as much when Team ACE is brought up.  We thought it would be cool to get some insight and thoughts from Trevor. Since this interview we have managed to connect with Cav Strutt and some other Team ACE riders so look for a Part 2 down the road.

Where did you first hear about BMX?
Like so many, I first heard about BMX from the US TV show, “Chips”.  Kids around the country then converted their Grifters to look like BMX bikes and emulated Motocross.  The first BMX bike I saw in person was being ridden by Cav Strutt over at our local Wreck off of Higham Hill in Walthamstow  – this must of been around 1979.

Meeting Don Smith.
During the Easter Holiday I was riding at the forest as usual on my bike when a few of my mates came up and said that there was a bloke down at the Motorcycle shop that wanted to sponsor me in BMX.   I didn’t believe them so I went to the shop as quick as I could ride and when I got there, Dave the manager passed me a piece of paper with a phone on it and said phone this man he is a friend of mine I passed along your name to him and the rest he will explain.  This man was Don Smith.  On the phone he explained that he had just returned from the US to see BMX and wanted to promote it in the UK and he wanted someone who was pretty good on a bike thus Dave giving him my name, he asked if I could go to his flat the next day and he would explain more.

The next day I went and took Nikki Matthews with me who only had a Raleigh Grifter at the time, we were good friends and I didn’t really want to go on my own.  When we went up into his lounge there was this red BMX bike up against the wall and I cannot remember what make it was.  Don proceeded to explain about BMX showing us BMX Magazines and a Video from the States he then said well there’s your bike let’s go over to where you ride and show me what you can do on it, then we will go to my friend Richard’s factory and he will be sorting out race kit and so on.

Meeting up with Richard Barrington at ACE?
At the factory is where we met Richard Barrington and as Nikki was with the two of us we were now both being measured up for race kits so Nikki said, “I’d better see if my mum can buy me a bike now”.  I had the red BMX a couple of weeks and because Don now had an involvement with the UK Mongoose supplier, Ammaco he changed my bike for a Supergoose from there a photo shoot was arranged with the local newspaper for me and Nikki and some of the other guys we rode with including Cav Strutt.  Don and Richard then said we need to put a race team together so we started holding little races in the forest then all the guys who wanted to be part of the team all met down at Richard’s factory and this was the start of Team Ace. Don and Richard had some wooden Ramps made and organized a demo race in Brockwell Park (1979) in London, Ammaco supplied some bikes and Danny Oakley from the US Mongoose Team came over as a guest, this was Team Ace’s first race. Cav didn’t race as he was more into Freestyle and rode Skateparks with Andy Ruffell, but Pete Middleton and Nikki Matthews were a couple of the riders that did.

Did Richard fund it all or were there others involved?
Yes, all funded by Richard.

Other Team riders?  It seemed to be quite a dream team so early on.
Cav Strutt, Andy Ruffell, Steve Gilley, Pete Middleton, Tony Waye, Nikki Matthews, Scott McDonald, Steve Gratton at some point plus myself of course those are the ones most people will remember.

ACE must have been one of the first legit teams in the UK.  What other teams do you remember at the time?
Ammaco Mongoose, Robinson, Halfords, Redline and Kuwahara were some of the earlier ones.

What was the background on the Ace Frame & Forks?
Richard opened up the Ace Bike Shop (ACE Racing at 444 Forest Road Walthamstow London.)  Cav worked in the shop setting up and fixing bikes.  After a while, Richard with the help from Cav started to design his own frame to take the Ace brand further.  Cav had a lot of input into the design, he and I both rode and tested the first bare metal prototype, then we both got the first chrome plated ones. 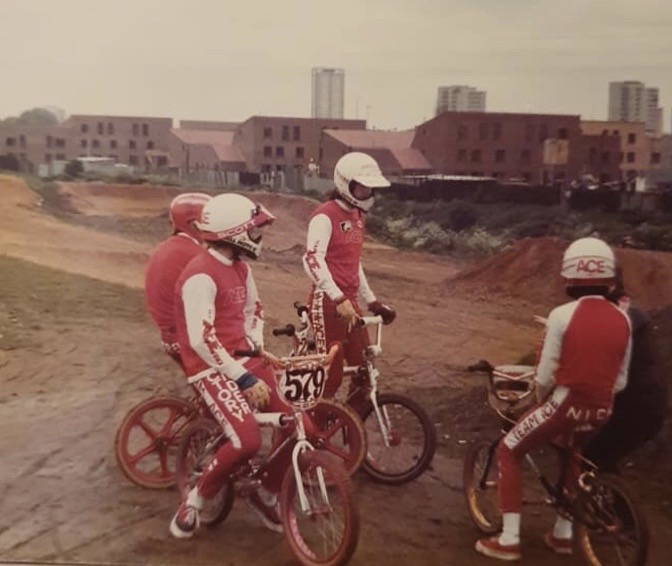 What happened with you on the team?
I finished racing the 83 season as a privateer after Richard sold my bike and pulled the plug in the team.

One day I had turned up about 5 mins late to go to a race at Ipswich, Richard refused to take me and dropped me from the team although I was always in the finals and winning the odd race.   For some reason he always favored Cav, Pete and Nikki & Andy had already gone over to Ammaco by this time, so my mum took me to Ipswich and I raced under no team name, I beat all the Ace riders in my class and also got myself in the Magazine during the jumping competition.

After a couple of months attending races on my own and getting my name in a few mags, Richard sent Cav over to my house and Cav said that Richard wanted to see me.  I went to see Richard in his office at the shop and he said that I was making a name for myself and did I want to come back on Ace?  I said I’m not sure as he might drop me again.  He apologized and said that as I was paying for my current Redline weekly he would pay it off.  He gave me a job in the shop as I had left school and didn’t have a job and he also started to pay me for riding which no one at the time knew.

You guys got a lot of magazine coverage in the early 80 then it seemed like Team Ace disappeared pretty quick, what happened?
Late 82 was the end for a lot of the other riders had been snapped up by the bigger teams and Richard decided to pull the plug on the team.

Cav had now given up BMX and wasn’t attending many races, Pete Middleton, and Steve Gilley had moved to Ammaco. I was doing the odd demo and at one time did a demo at a motorcycle shop in Wales.  I was now 17, had a motorcycle and a girlfriend although I was attending the odd race and riding over at Rom etc

I was at home one day and one of my friends came to my house and said that Richard wanted to borrow my bike as he was selling the design to someone.  A couple weeks passed still no sign of my bike so I went to Richard’s house to ask where my bike was to his reply he said it wasn’t mine in first place and that he had sold it along with the design as BMX was dying off.  The shop had closed so I asked Richard what about my money for riding and what am I going to ride with that little contract he had written up a year or so ago in the shop? He tore it up and said I could get a ride anywhere.  This was now the end of Team Ace.  I borrowed a bike and rode for a little longer but not only could not get to many races and not compete with the now faster riders and big teams so my time in BMX was sadly over and my time in BMX was short-lived. (1979 to 1983) I then went into Motocross I tried to go back into it around 85 but I had been away for too long.  So that is the true story of Team Ace from start to finish as it was.

Richard passed away in 2012 but his name and ACE are stapled in the history of BMX in the UK.  You must be proud of having been involved in something so special in British BMX from the early years?
I still have a couple of bikes & still go over.  I was interviewed for the Rom Boys documentary which should be out later this year.  As I said before although myself and Nikki Matthews were at the very start and got all the lads together to form the Ace team, my name is rarely mentioned only the guys who were lucky enough to move to the bigger sponsors – I stayed with the people who got into BMX to be loyal but had taken away just as quick.  On the hand I still have a lot to thank; Richard, Don Smith and Dave from the shop I worked at for giving my name to Don otherwise I wouldn’t be here telling the story about Team Ace which may have never existed.  I feel very proud to have been a part of although short lived a part of British BMX History and lucky enough to have rode with some of the riders who became top Pros and big names in the sport.  I hope this is ok I told how it was and as much as I could remember as I am an old bugger now. Thank you for asking me to tell you my story as I said I am pretty much forgotten now.