The first World Championships to hit European soil goes back to 1983 in Holland, which was under the IBMXF umbrella at the time before merging into the UCI that’s now known as the world governing body for all of cycling. The event was a huge success for its first outing – outside the US, held in Ponypark, Slagharen and organized by Gerrit Does and the Royal Dutch Cycling Federation (K.N.W.U.).

With over 1000 entries, 15,000 spectators over the 2 days of racing, and broadcasted on National TV, it was the first time the majority of the top riders from the the UK got to stack-up against the best riders in the World. Including riders from GT, Kuwahara, JMC and Hutch all U.S. Teams who had flown over for the race.

Even though it was a World Championships there were two classes offered to race; Expert and Juniors. With a lot of the UK’s top riders at the time who were still fairly new to the sport, they decided to go the Junior route qualifying though a couple of events put on in the UK prior to the Worlds.

Up to this time, no British rider had won a World Championships title in any class previously but by the time the event was over, Diamond Back’s Louis Mears, was crowned Britian’s first official and only World Champion at the time winning the 7 year old Juniors class and backed it up with a 3rd in the Open class against the top expert riders.

Louis received the star treatment once back in the UK, he was plastered all over the BMX Magazines, appeared in the mainstream media including many TV appearances with a segment at the Westway Track in London riding with all of the locals that was broadcasted on the morning news. 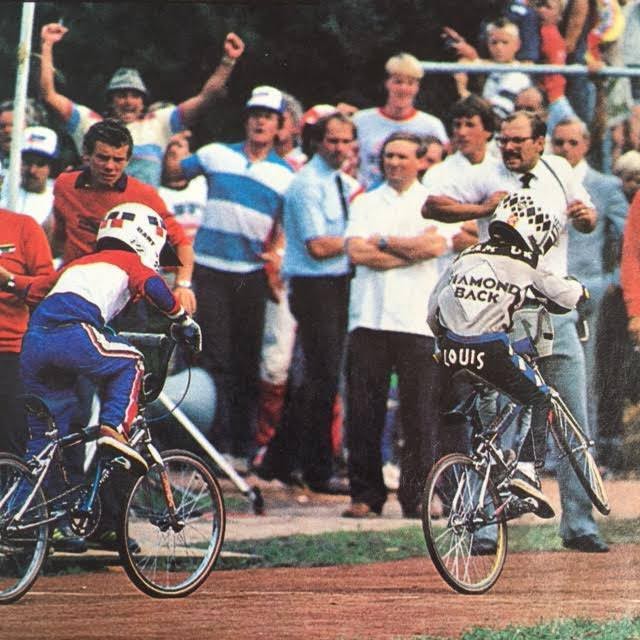