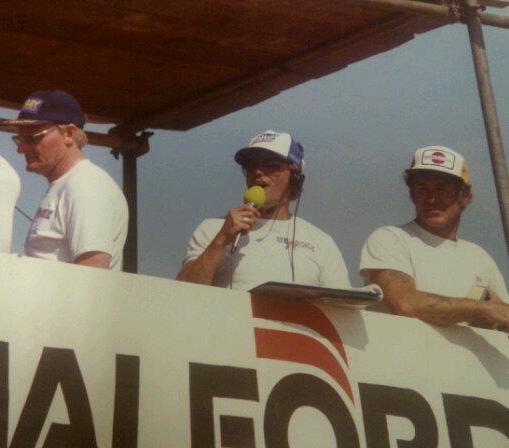 The golden years of UKBMX racing was not just about Andy Ruffell, Tim March and all of the familiar names we saw at the races, on TV and read about in the magazines. Some other names off the track also helped make racing magical during the the 80s when the sport was growing at a fast pace. If you raced UKBMX and enjoyed to throw an elbow or go a little early on the gate, then chances are you ran into Chief Referee, Norman Darbyshire. Norman was a little intimidating if you ever saw him walking towards you at the finish line after a race – you’d take a deep breath – yet at the same time, he was always fair and respected all the riders with the decisions he made. He was a “ref” throughout the 80s and into the 90s both in the UK and on the international stage including European and World Championships races.

Sam Wood, pictured in the center, was not only Team manager to some of UK’s big Factory Teams including Skyway, Pro-Lite and Raleigh but also one of the best commentators ever to hold a microphone, even today. Sam had style not just in the Pits but also with his team set ups and was a huge crowd favorite on the mic every time he climbed in the tower. Every National with Sam’s commentary would be guaranteed with an electrical atmosphere. If you check out some National archives on youtube there is a good chance you will come across some of Sam’s great “one-liners” during the races. Anyone remember “Humongous” or Sam’s identifiable “put-on” Jamaican accent he would use when Winston Wright was out on the track! Sam also spent time as Chairman of UKBMX for a period of time and did a fine job at that as well along with being such a likable character on the UKBMX scene.

Vic Roberts ( pictured right ) like Sam was from London’s Region 9 and was one of the legendary UKBMX starters from the 80s with his slow-call ( compared to most starters ) yet precise & consistent dropping of the gate. And, how can you not remember those first words you would hear from Vic when you were lined up on the gate ready to go, “Set em’ up Lads”. Vic shared the starting duty at the Nationals with notables like; Les Slater, Brian Pickstone and Sonny Ives and also enjoyed the honor of being one of the official starters for the 1986 Slough World Championships.